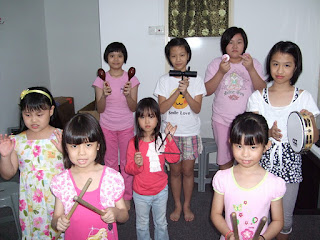 About a fortnight prior to this event, my usual group of students were put through preparations for the gathering. We worked on the musical activity that was to be featured at the gathering because the YMSD students have been tasked to lead their friends during the event. Tapping a bit into their artistic skills, the YMSD students were asked to create invitation cards for those friends they were inviting.

We began by understanding something about these percussion instruments. Then we explored ways to play each instrument to discover the timbre produced. After which, different rhythm patterns was assigned to each instrument and rehearsed to be performed to a prerecorded musical piece. The challenge was for the children to perform their assigned rhythm pattern without wavering.

To carry out this performance, I informed the children that they would have to listen attentively to the music, to themselves and to each other. I had them realize that they need to develop critical listening to perform well as an ensemble. Once they understood what was required of them, they were very focused and excited about performing music together.

They demonstrated that they were quite capable and performed decently well during the workshop. As long as they enjoyed what they did, the experience would leave a positive mark on them. For me, it was mission accomplished when they expressed to me that music is fun and about enjoyment.

I would encourage music schools and music teachers to organize similar gatherings to spread the joy of learning and playing music. Plan and organize some musical activity to involve everyone. Give your students a chance to teach and lead their friends. It will surely help you to know your students better. You can be surprised by what your students are capable of if given the opportunity.