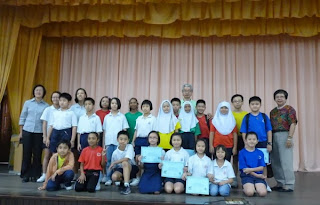 The main theme for this year's annual Music Jamboree was "Empowering The Students To Lead", and this was put into practice during the 2-day session with primary school students. The purpose of this theme is basically to have students rise to the challenge of leading a team in carrying out musical activities at this event. The musical activities involve singing, body movement and percussion playing. These three elements are to be collectively presented in a performance by each group of students. There were a total of seven groups comprising about 160 primary school students from three participating schools. Students in each group are divided into smaller groups under team leaders to carry out their assigned musical activity that they must collectively perform the next day. 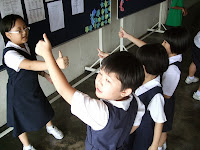 I have always maintained that grooming an individual takes time and must begin as early as possible. To train students to lead is to develop their confidence and their minds, as well as their ability to plan and communicate with others. If they are able to hone these skills and gain the respect of their peers, then they would be on their way to a more successful life. Primary students spend all their time at school learning subject after subject. Other than academic subjects like math and science for example, only music and sports would involve team work. 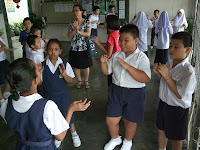 The students from the participating schools who volunteered to be team leaders began honing their skills a few months prior to the event. This was not an easy task as the young students have never assumed such roles before. Much encouragement and assurance is needed to make the students feel at ease.The more training they have of the assigned tasks, the better they should be.

Obviously most of the students when volunteering to be team leaders, though aware of the task and responsibility they are to assume, were not able to sense how monumental and intimidating it can be. It was during the music jamboree when they have to put into practice their training, that they discovered something else about themselves. 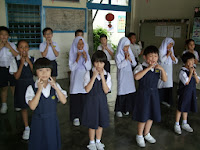 There were those who were so intimidated by the sheer size of the turnout and everything that was happening around them. Some felt their confidence slipping away because they are not familiar with the music jamboree teachers and students from other schools. Of course, they are still very young and I do not expect them to be super-sociable with everyone they do not know. Besides, the daunting task of having to teach other students while under the observant eyes of the teachers can be quite intimidating for these young student team leaders.

Nevertheless, though they acknowledged their weaknesses when speaking to them during our regular music class, they realize their mistakes (if any) and how they can improve for the next music jamboree. I can only be glad that they had this realization and are willing to up the ante for themselves. From this point of view, I can safely say the purpose of letting the young students rise to the challenge and spurring them on has been successful. It is just the first step to many more steps that lies ahead.

Here are responses from some the student team leaders. Let's begin with the guest students of the visiting school.

Kee Wei Ming (Tar Thong): I made friends with many students at Peng Hwa and enjoyed performing percussion with them on stage the next day.

Munis Vitya (Tar Thong): My role is to create body movement steps to the music and while teaching the students in my team, I also learned more body movement ideas from the teachers. It was a good experience and I am very happy to have taken part.

Ooi Yi Sheng (Tar Thong): Teaching students in my team to play the tambourine was easy and fun. I enjoyed my role and the music jamboree. I am looking forward to the next music jamboree.

Chan Xu Peng (Tar Thong): I am glad I had the chance to experience teaching others to play a percussion instrument although some of the students in my team were quite naughty (mischievous) and did not pay attention to me. I also got to make new friends there. I hope that I can attend the next music jamboree.

Munie Lekha (Tar Thong): I had to teach body movement to the Year 1 students and though they did not pay much attention to me, I did not care and insisted on teaching them for the performance. During the performance, I was very excited and brave performing with the other students. I felt most relaxed and happy after the performance. I would like to come back to the music jamboree next year.

Mohd. Ridhwaan (Tar Thong): I enjoy exploring music at school through body movement, rhythmic ensembles and vocal singing. At the same time, I can develop good personality and social interacting skills through musical performances with other students. I enjoyed myself during the two day music jamboree.

Chong Yi Jie (Tar Thong): I was very happy to join the music jamboree but very nervous about being a team leader. With the teachers helping me, I learned more and became better. I felt good at the end after the performance.

Now, let's hear comments from some students of the host school.

Goh Wan Chern (Peng Hwa): I met many teachers and made new friends at the music jamboree. I learned a lot and had a good time. I was a bit nervous during the performance but it was fun.

Edmond Yeoh (Peng Hwa): I felt bored because the teacher did not let us use the ideas we had. But I made two new friends from another school.

Yeap Jiang Wei (Peng Hwa): I felt very happy that I met and made a new friend during the music jamboree. I learned that friendship is very important and we must help a friend in need. Perfoirming on stage was very exciting.

Goh Fay Xien (Peng Hwa): I discovered that it is not easy to be a leader. But I had a wonderful time and wish I could meet the jamboree teachers again. It was really fun.

Jessica Teoh Yi Jie (Peng Hwa): I am very happy that I learned a lot of music. I love attending the music jamboree.

Posted by WilsonQ No comments: