YMSD: To stir the young musical minds to explore and create.

For music educators,we derive much gratification in attempting to stir up the musical minds of eager young musicians to get creative and explore musical ideas to incorporate into their music. The joy of being able to enhance their music by adding embellishments, etc to their music gives them the chance to experiment and put musical ideas into practice. Such explorations will give any musician more purpose to learning and knowing music.

Normally, the YMSD programs that I conduct are centered on piano students. Recently, I was invited to be a clinician during the Butterworth Chung Ling Secondary School's music camp. It was an opportunity to conduct the YMSD program for an entire orchestra and bring a different experience and perspective of musical performance to these young musicians. 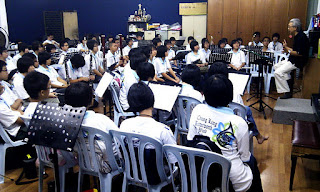 It was a full day camp involving various students music ensembles that the school hosts. I was assigned to the Wind Orchestra and it was indeed a wonderful session that I experienced with them.

The YMSD program comprise various musical elements with improvisations being at the core. However, with an orchestra comprising more than 70 young musicians, it was not possible to have everyone improvise when they do not even know the word and what it means in music particularly. I cannot use any of the classical works either as it would tantamount to desecration. Improvisation had to be presented in a different manner using a contemporary musical piece that they can perform well. 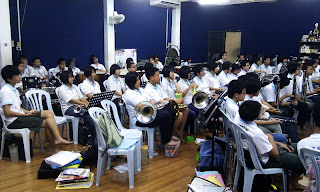 We explored with rhythmic ideas for the percussion section to add, and for the brass section's tutti passages that can be altered to enhance the groove of the piece. Using various elements of music theory like musical scales, additional lines (melodic ideas) were layered in to add more 'color' to the musical piece. I wanted all the young musicians to know that they have quite a lot of theoretical knowledge to use creatively 'to own' the music they are playing. 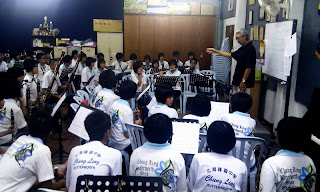 It is just not merely reading, performing and reproducing music exactly from a score that can be purchased commercially. Any ensemble around the world can purchase the same scores and will all sound similar as each other if they perform the music as is. The YMSD program was to offer them ways in which they can add and alter parts of the music creatively.

I hope to encourage them to begin such musical explorations as an ensemble or individually on their principle instrument. I did explain about melodic improvisations and demonstrated how it is done too. It will be a process of trial and error for them to discover which ideas will work. However, without any attempt to explore music further, it will not hone any musical though or skill. Of course, to attempt such ideas in such a large ensemble will also require the participation and direction of a capable musical director/conductor.

I can only hope that I have stirred up their musical minds to get them eager to explore music in a more creative manner, and to perform their ideas. It will require willingness and perseverance on their part to achieve any success. I can only try to open the 'doors' of their musical mind and show them what is possible. They will have to walk down that journey themselves.
Posted by WilsonQ No comments:

After my last report, the students and I met for two more sessions to work on rhythmic activities. We worked on rhythmic flow in a steady pulse as the young students need to learn to settle down and not run away with the tempo, which many often do. Teachers do frequently find their young beginner students playing a song with irregular tempo, speeding up and/or slowing down.

The metronome can be used to help young students develop a better sense of steady pulse. First, the young student must be able to read the notes well, play the song without mistakes and at a much slower tempo if necessary. The next step is to play the song up to mark using the metronome to keep time. In the early stages, this has to be done regularly during lessons and during practice by the student at home. Likewise, the metronome is most ideal to use for finger exercises involving scales, arpeggios and broken chords.

While working on the rhythmic activities, I was also preparing the YMSD students for a year end assignment by encouraging them to create a simple improvisation on a song of their choice using all the improvisational ideas we have explored so far.

The following week after, only young Emily was able to attend class and she chose the song "We Wish You A Merry Christmas" as Christmas was approaching. Very appropriate! I asked what improvisational ideas she had for this song. She suggested a rhythmic idea using repeated notes and melodic alteration where possible. Of course, she is not yet capable of a complete improvisation of the song and can only apply improvisational ideas sporadically while keeping most of the song intact.

We discussed her ideas and I offered some suggestions where in the song would her ideas apply best. I asked her not to write down her ideas but to remember them, hoping that it would allow her to expand those ideas or develop new ideas as it swirls around in her head.

At this week's session, the 'missing' students showed up and Emily was ready with her presentation of the song that she has been working on for the entire past week. Below is a clip of Emily's simple improvisation as she performs the song.

The entire clip features three continuous sequences of the song. The first is an actual sample of the song as it appears in the Piano Lesson Made Easy Level 3 book. The second sequence features the use of repeated notes in Bar 3, 5, 7 and 8. The third sequence features melodic alteration in Bars 3 and 5, and repeated notes in Bars 7 and 8. Bar 1 contains an anacrusis, which is a pick up note to the song.

With this song, We Wish You A Merry Christmas and A Happy New Year!


Posted by WilsonQ No comments: