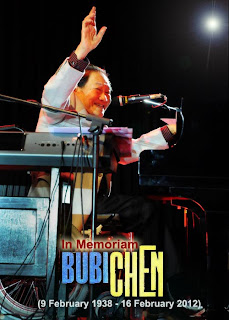 The entire world was shocked to learn about the sudden death of Whitney Houston that happened a day before this year's Grammy Awards. While many were coming to grips with Whitney's passing, another 'great musician' passed on here in Asia.

Though not known today to many in this region except for Indonesia and those who have heard of him and his music, Bubi Chen passed away from complications as a result of diabetes in Semarang, Java. There is much to know about this great jazz legend and do Google his name to know more about him. I would also recommend listening to his performances on You Tube. 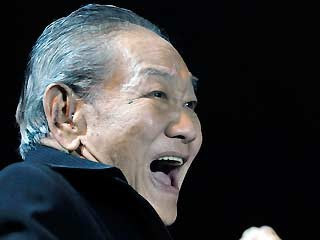 I have had the pleasure and honor of working with this great and legendary jazz musician on quite a few occasions during my work trips throughout Indonesia. During those years, we were adjudicating for the annual Piano Festivals held in the major cities and towns throughout Indonesia. I was awed that almost everyone in Indonesia, from the blue collared worker to anyone high up in the echelon of politics and business, knows his name. So known is his fame that this celebrity is indeed a 'household' name and brand there.

By the mere mention of Bubi's name, everyone knows his brand of music, which is jazz. Fans have come to expect great music and virtuosic performances from Bubi whenever one listens to his recordings or watch him perform live. A highly skilled pianist with a genius musical mind, his life is about music and he loves to perform for any audience, anywhere, anytime. He loves to share his music with everyone and anyone who appreciates it. 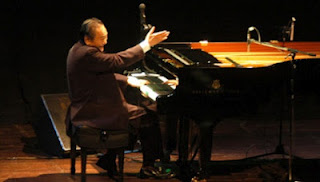 Some years back, I last visited Bubi in Surabaya while on my work tour. I asked if he was still performing much. He replied that he has not due to his health and that his technical skills are suffering as a result of not performing and practicing as frequently. But believe me that his skills are still very apt at that time. It is only that Bubi sets very high standards for himself.

If we reflect on this, it says a lot about developing and maintaining one's skills. One must aim high and constantly practice to keep one's skills in shape. Lots of practice time is dedicated to working on the musical scales, arpeggios and broken chords among others. For pianists, the virtuosic Hanon exercises, Czerny School of Velocity studies, Etudes, etc. are necessary for developing technical skills. Practices have to be done daily to acquire the required skills and agility to play a musical instrument. Otherwise, one will never develop adequate skills to discover if one has the potential for music or not. To be good at anything, one requires determination.

I am sure it was through sheer determination and passion that Bubi picked himself up and continued performing over the last few years. I was truly glad to hear that he was back performing again. I thought his health problems would halt his performing career. Knowing Bubi, he would not pass on a chance to perform if he can. He was still performing even after both his legs were amputated due to diabetes. He was featured to a packed house every year at the Java Jazz Festival. Friends told me that they could not even get past the entrance to a Bubi Chen performance during the event last year.

So, do read up about this great legendary pianist's life and be inspired by his musical journey. Also, do listen to his recordings through the internet or get his albums. You will be amazed by his musical skills at the piano. With Bubi's passing, Asia has lost one of her most glorious and talented jazz pianist. Bubi will be dearly missed by his friends and his fans.
Posted by WilsonQ 1 comment: