A recent workshop with secondary school students who have music certification from the intermediate level upwards gave me the opportunity to help them put music rudiments and music theory that they have learned into practice.

We began by identifying specific topics in music theory learned throughout their graded music studies and how to use them to create and perform music. This is wholly done with the hope of validating their years spent learning music and to create greater awareness and appreciation in music for them. 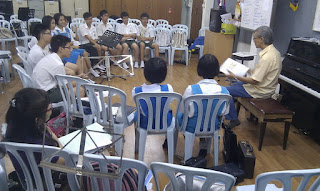 Being a strong advocator and practitioner of music improvisation, I particularly focused on how music rudiments and music theory can improve their musical perception using improvisation. Engaging the students individually at the piano at improvising was a new experience for all of them.

Obviously, their musical abilities and skills differ but their attempts did demonstrate some musical thought and substance when properly guided. It shows that music students are capable in their own way of musical creativity if given the opportunity.

I hope to have opened up their musical minds to encourage them further to explore musical creativity by putting music theory into practice. Hopefully, it would validate the years they spent learning music, find relevance in it and enjoy musical explorations in whatever way they can.
Posted by WilsonQ