Here are a few more compositions to share with you. If you like the compositions featured in these series of articles, you are most welcome to try them out and create your own accompaniment of the piece for the piano.

The composition below was submitted by Seow Yin Ze whose other composition was featured in the previous article. Quite an interesting and creative title given to this song that reflects the melancholic mood in the way it was composed and to be performed.

An analysis of this piece:
- Composed in A Minor scale (relative minor of C Major scale).
- Some parts of the melody is harmonized with a note that is an interval of a third below the melody. Intervals of 3rds and 6ths are consonant intervals commonly used to harmonize a melody.
- The chord progression uses four chords, moving from Am - G - F - E for the duration of one bar each.
- There are folk songs and pop songs of different genres that use this chord progression, either for the entire song or for part of the song (perhaps in the A section where the main verse is).

Melancholy means sad, depressed, miserable. Therefore, it is obvious that the piece must be performed in a slow (adagio) and melancholic style. 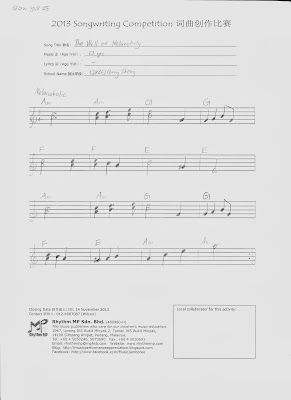 Below is the recording of this piece as performed by Yin Ze.


Yin Ze did submit another composition but this composition bears some resemblance to his younger sister's composition titled "WISHES" that was featured in Part 1 of this series of articles. It is obvious that being in the same household, siblings can get influenced by each other.

Likewise, in the professional world, it also happens. Haven't you experienced hearing a song and telling yourself that you have heard another song that sounds somewhat similar? Though not entirely from start to end as it would mean an infringement of another composer's work, but some parts sound similar. 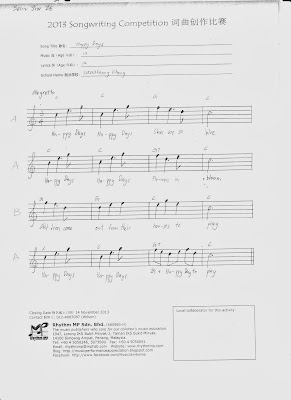 In simple triple time, it is obvious the accompaniment will be in the style of a waltz. Listen to Yin Ze's performance of his composition below.