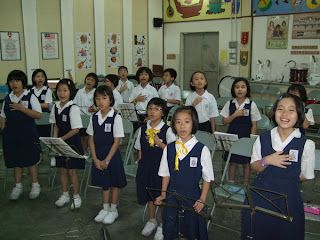 The activity during this session was to have the students mentally create and vocalize a short melodic motif. Though the thought of such an activity first overwhelmed the students, explaining the process of composing a simple melodic motif and having the students believe that they can achieve such a feat was most necessary. Following that, all the students were clamoring for an opportunity to participate in this activity.

Having to spontaneously compose a short melodic motif mentally requires some basic understanding of music scales. There are two music scales commonly used in compositions, which are, the major or minor scale. Some vocal exercises to familiarize oneself with the note pitches that form the scale would greatly benefit the students before carrying out the actual activity.

To develop greater music appreciation, the entire class was asked to comment on every melodic line that their fellow students created during the session. Valid comments were given by the students as they considered what they have just heard. So, it's either they liked or did not like what was created and to give their honest opinions about it.

Taking this activity another step further, students were then encouraged to respond to the melodic motif by spontaneously creating and vocalizing a continuing line (development of the original motif). This process is the first step in showing how composition of a song begins.