As the school year was winding down towards the year-end break, we announced to the primary school students of Rhythm MP's CSR Music Outreach Program that we are going to embark on a music composition project after their school term exams. Other than just the melody line, we encouraged them to add lyrics and chord symbols (if possible) to their compositions.

The added incentive for them to compose is, if their compositions are worthy, it will be used at the 2014 Music Jamboree event and possibly to be added to the activity pages in the very popular Made Easy series of piano method or theory books published by Rhythm MP for the young beginner.

I do not wish to feature all the compositions in one long article on this blog. Therefore, over the course of the next few weeks, I will feature a selected collection of compositions in this blog with some analysis to create awareness and encourage musical creativity through composing. I would like to thank all the students who participated in our music composition project for their effort and enthusiasm.

The first composition to feature are the ones with a recording to listen to. Here are two compositions from 10 year old Seow Yu Xuan. The first is titled Wishes. It is a piece in binary form (AABA) with chord symbols. 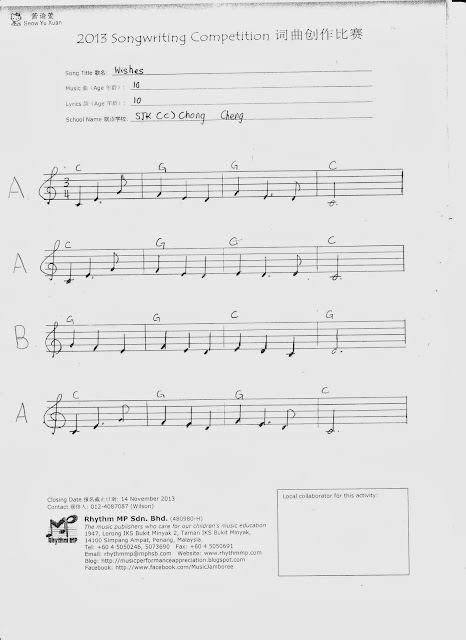 Let's hear Yu Xuan perform her composition on the piano.

The second composition from Yu Xuan is titled Happy Kangaroo. For this piece, she wrote lyrics to it. Also in binary form (ABAC) with chord symbols. 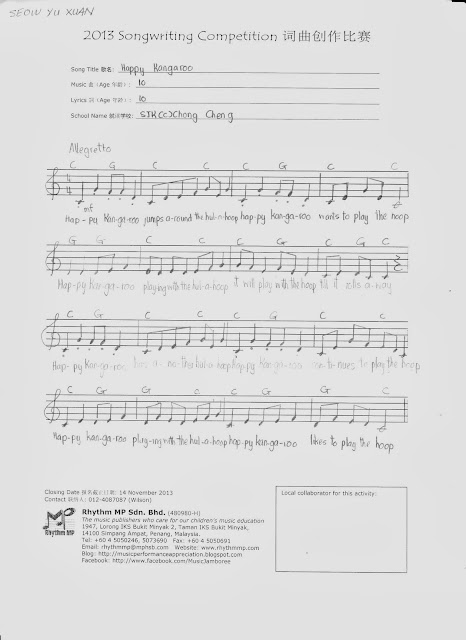 Below is Yu Xuan performing Happy Kangaroo on the piano.


The following is a composition by 11 year old Wong Chien Chien titled We All Grow Up (AABA form), with lyrics and chords. 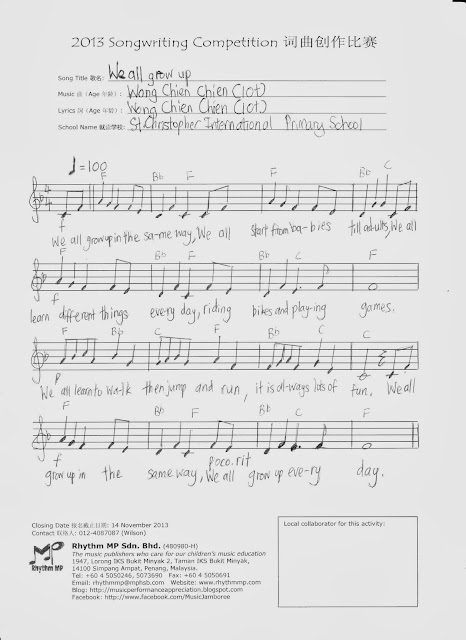 Here is the recording of Chien Chien performing her composition on the piano.

Chien Chien suggested that her composition can also be performed in a swing feel. Below is the clip of her performing the piece with a swing feel.