A story of true passion, dedication and selflessness.

One evening some weeks ago, while having dinner in a restaurant at the historical Mixed Clans Jetty in Penang, I heard the sounds of numerous musical instruments emanating from the house next door. Curiosity got the better of me and I walked over to have a look. I saw a group of teenagers practicing various musical instruments, from Western and Chinese classical music instruments to the modern electric guitar.

I wondered who they were and what was their involvement with music. I caught their attention and after a brief chat, I learned that they are an independent musical ensemble. I wanted to know more about them and made arrangements to meet a fortnight later. 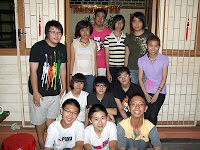 This is their fascinating story that I would like to share here. The founder of the ensemble is a 15 year old student named Khor Kar Hoe (front row extreme left in photo) who formed the ensemble back in 2009.

They humbly call themselves the Zero Orchestra, which I thought was rather odd because who would ever want to label themselves as a zero. Khor explained that they are all amateurs and see themselves as a zero for now. They hope to become heroes some day when they achieve a much higher level of musical skills and performance.

The orchestra was created for a few noble reasons. 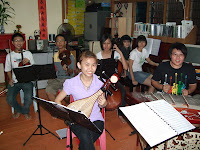 Primarily, it is out of pure love for music. It also serves as a platform for school leavers who were members of their school orchestra to continue their musical journey. It is also for those who desire to get involved in performing music. Being together allows them to share music with each other and with the public as well. 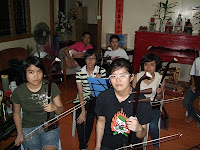 They recruited members through the Facebook social network and through friends bringing friends who are interested. However, not everyone who joined are able to play a musical instrument. So, Khor took it upon himself with other ensemble members to teach these members at no cost at all. Khor says everyone who joined are committed to the same cause and that is the reason he is more than willing to help them learn music. Every member is encouraged to learn at least two musical instruments. Khor excels in quite a few instruments. Today, they have 60 members comprising students and young working adults whose ages range from 13 to 23 years.

Their wish is to recruit more members and turn this 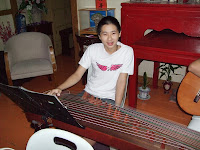 outfit into a professional orchestra someday. They have no funding nor a proper venue to practice. All activities are conducted at Khor's family home. The entire living room is turned into their music room with the blessings of Khor's family who are very supportive of his efforts. Since the living room is unable to accommodate 60 musicians, they form into smaller ensembles taking turns to practice every Sunday. It is just pure passion for music that brings them together and their willingness to overcome any shortcomings to pursue their dreams.

Their weekly routine comprise music theory and instrumental studies every Friday and orchestral practices every Sunday. They set a target to perform at least ten times annually if possible. They were either sought by people who heard about them or like in my case, happen to stumble upon them when at the restaurant next door. They attempt all genres and styles of music from classical to contemporary music. They also experiment using a mix of Chinese and Western classical instruments in their repertoire like what they did with Bach's Canon in D when I visited them.

Another interesting fact is their involvement in the Penang Youth outfit where it serves as a platform for the youth to play a significant role in community development dedicated to helping young students. Their efforts are indeed highly commendable. To me, the Zero Orchestra are already heroes for what they are doing for the community and for each other.
Posted by WilsonQ