Young students generally get stumped and find it difficult to start composing. It is always the very first bar that poses numerous problems; what to write, which notes to use, what sounds good, etc. In short, considering too much.

Furthermore, our students are young primary school students who do not have years of formal music learning and music training. In fact, not many even after having learned music for a few years, are really capable of composing music on their own. Those who do are either prompted and carefully guided, or impressed upon.

Firstly, we have to understand what is required in a composition. A composition basically requires a melody (the tune of the song) supported by chords. Chords provide the harmony to support and accompany the melody. One cannot imagine a song today comprising of only melody without chords.

Our focus here is on melody writing. Chords require much training to understand. To assist the young students to begin composing, here are some pointers to consider. Let's begin by paying attention to the sounds of a scale. In this case, we take the C major scale that most piano methods and theory books begin with. This about getting the very first bar of a composition started.

Normally, the first bar of a composition uses the Chord I of the scale, which is C chord. Let's explore the sounds of notes from the C major scale with C major chord.

Take a look at the C major scale shown below. Notice that the C chord ( C E G) is in the Bass Clef. Play and hold the chord while playing the scale up and down (ascending and descending) . Notice that all the notes sound fine when played in this manner.

Next, let's look at the other notes in the scale. The three notes D, A, B played with the C chord may not sound that ideal. The sound of these three notes do not really match with the C chord. But it does not mean that they create a bad sound. They just have to be used with caution. These notes are termed as non-chord tones as they are not the same notes used in C chord.

The only other note left is F note. I left this note till the end here to demonstrate what is considered a 'bad clash' when playing this F note with the C chord. Try it and you will understand what I mean. 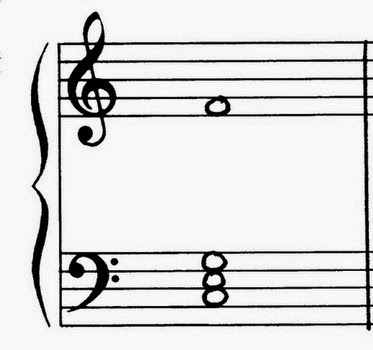 Obviously, F note is to be avoided as the starting note with C chord.

Below are more examples using a mix of chord tones and non-chord tones.

Let's experiment if using just the non-chord tones to compose your first bar of music would work. Play the examples and you will feel that none of them create a good opening melody. As mentioned above, you would want to use a mix of chord tones and non-chord tones.

Again, leaving the use of the F note till here is to demonstrate the musical pitch of F note that does not suit C chord if you compose your opening bar of melody in the manner below.